I managed to get a few hours of sleep last night after waiting up to photograph the "blood moon".  Blood moon appeared in the early hours of the morning of April 15, 2014.  My kids stayed up very late because they really wanted to see the moon turn red.  I promised I would wake them up to show it to them (with the disclaimer of that as long as I, myself, am awake ;) ) but they were steadfast about waiting up to see it happen.  That ended up backfiring pretty badly because when I did wake them up to show them they were so tired they don't even remember seeing it :(.  Luckily I got some photographs of it, and was able to show them the pictures of what it looked like, so that's happy.  Oh and they did stay up long enough to see the moon begin to eclipse so that was still cool for them.

Anyway, so the eclipse started with a shadow moving over the moon. 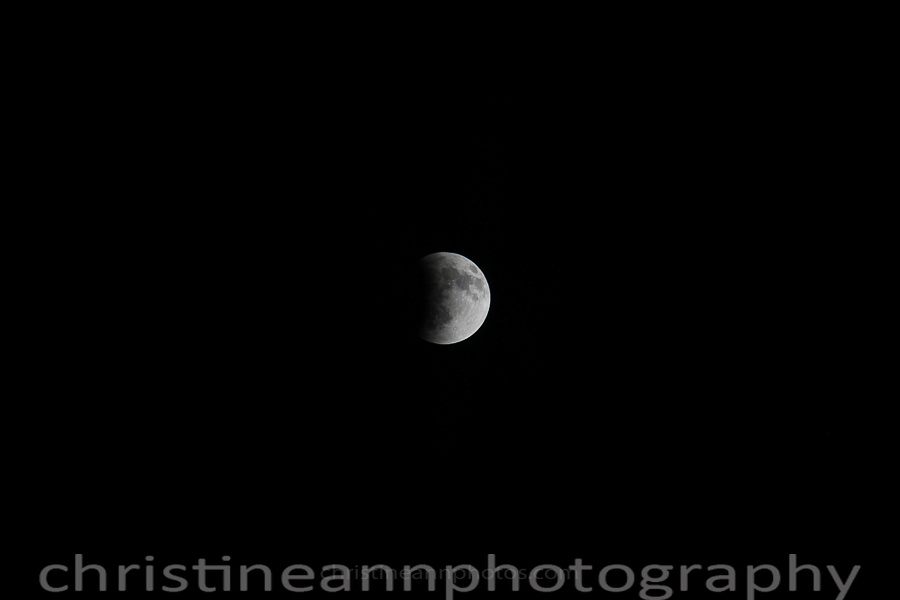 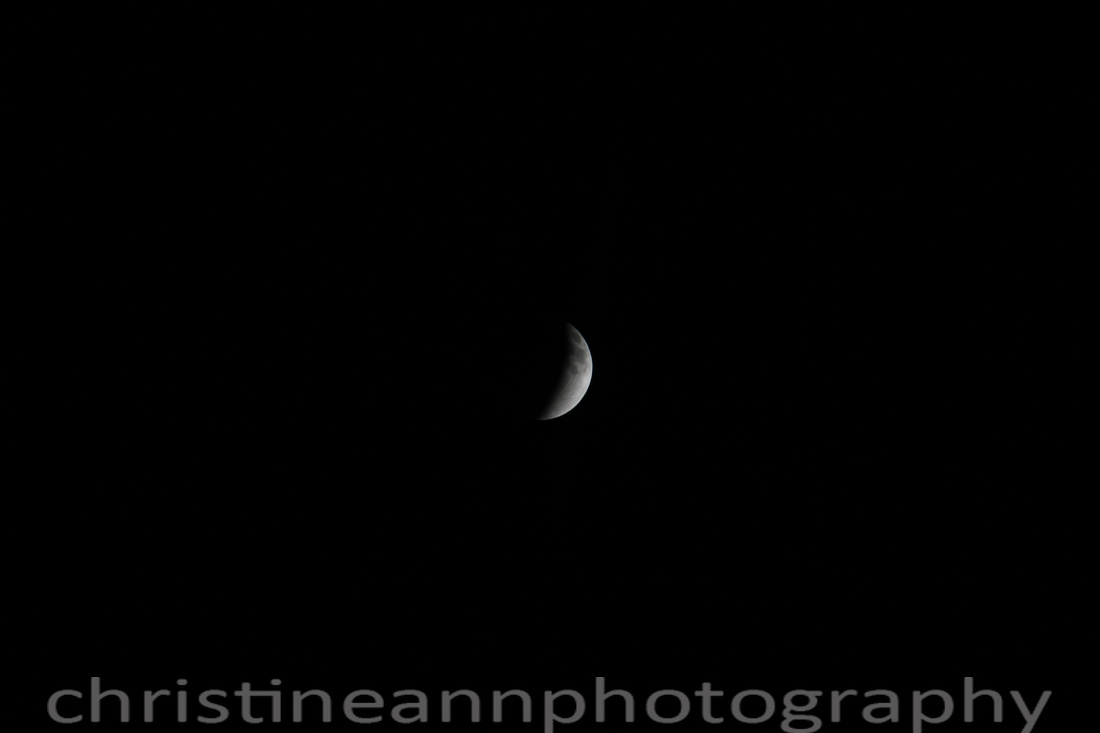 The shadow moved surprisingly fast across the moon.. once it was engulfed in shadow, the moon began to glow red. 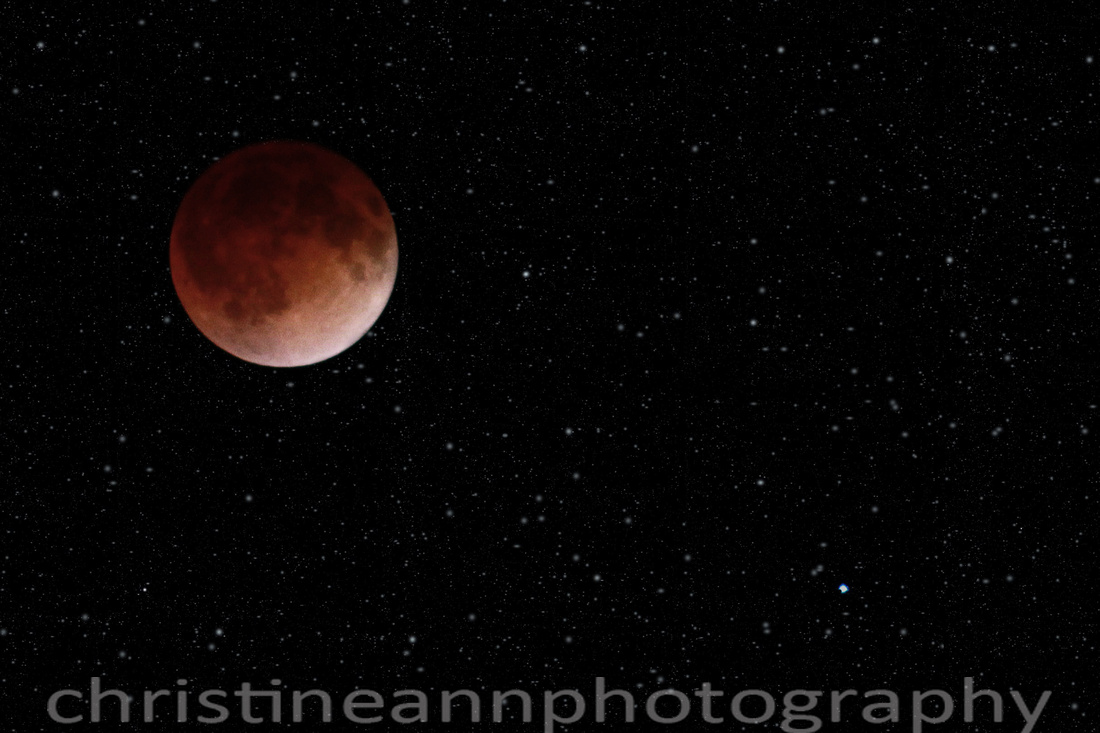 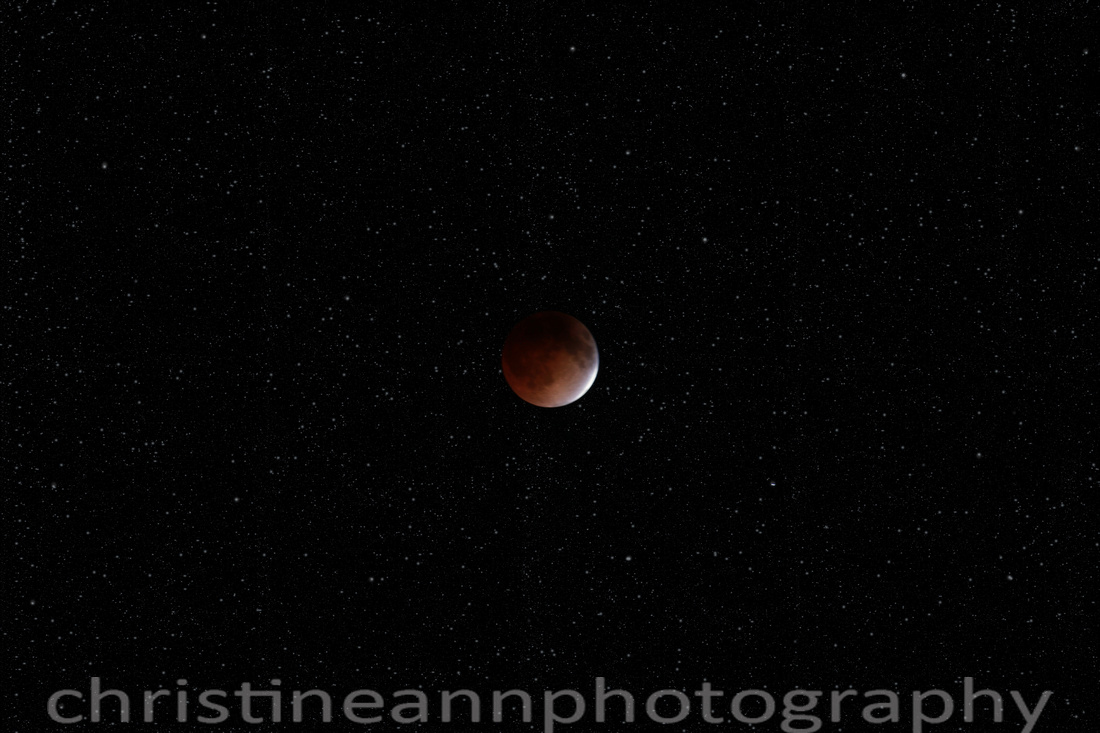 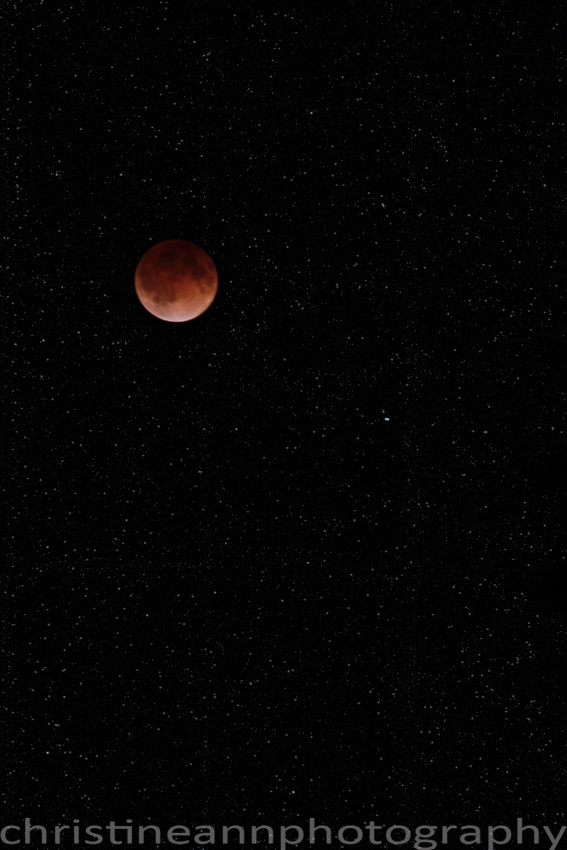 These are probably my favorite shots from the night.. but they are all cool [ all photos I have seen of this eclipse ] something about a red moon is just automatically visually interesting. 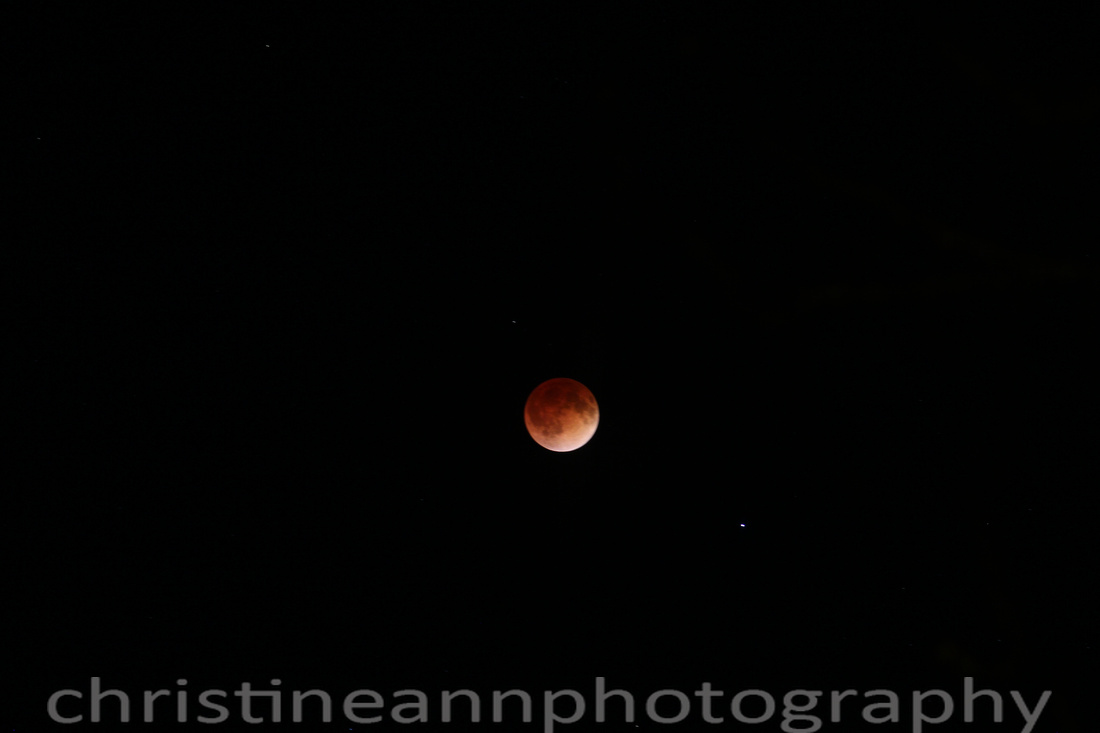 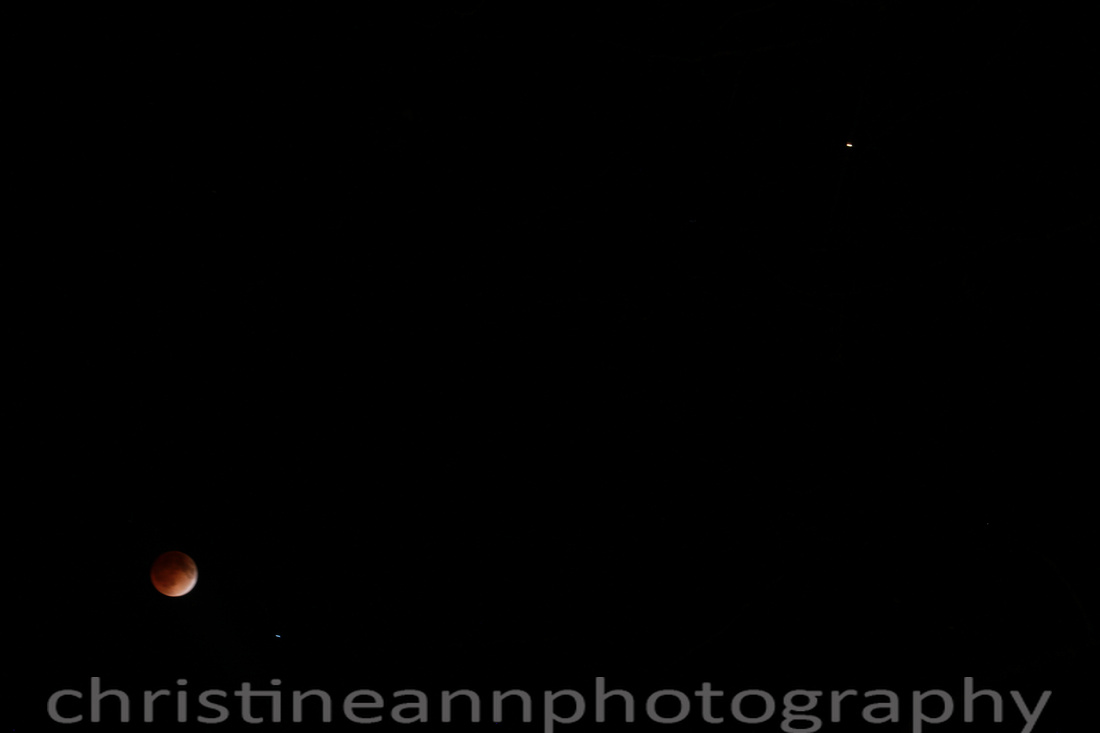 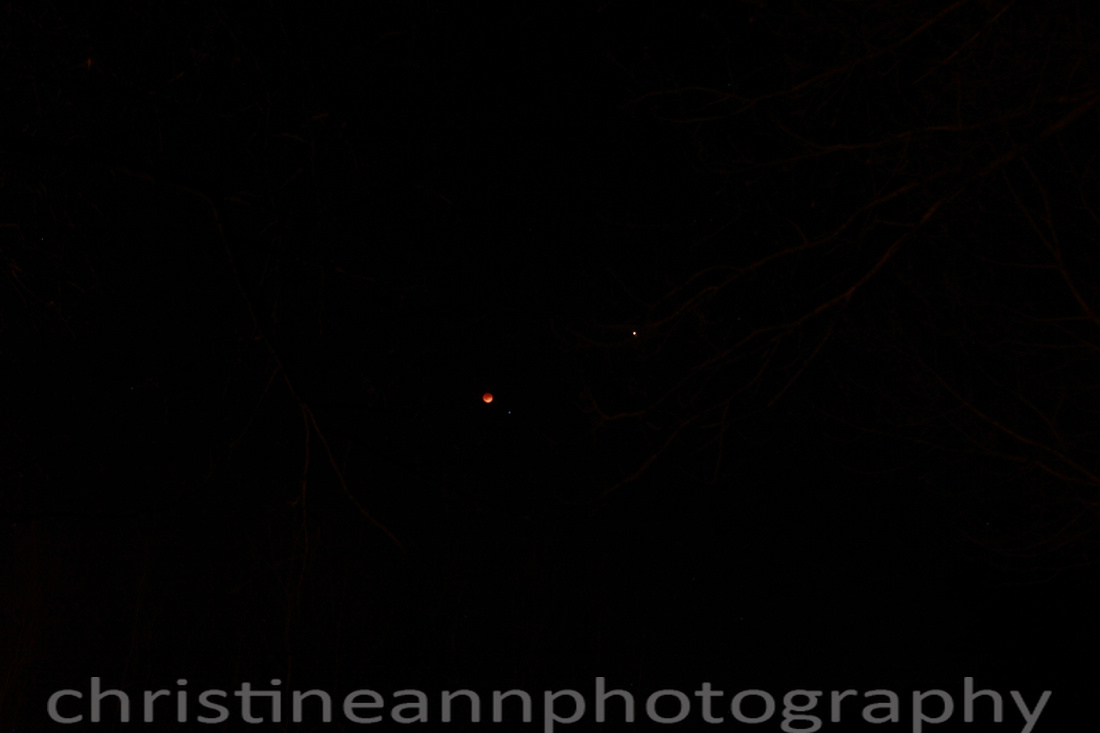 .. aaaand some pulled back shots for some Blood Moon variety. 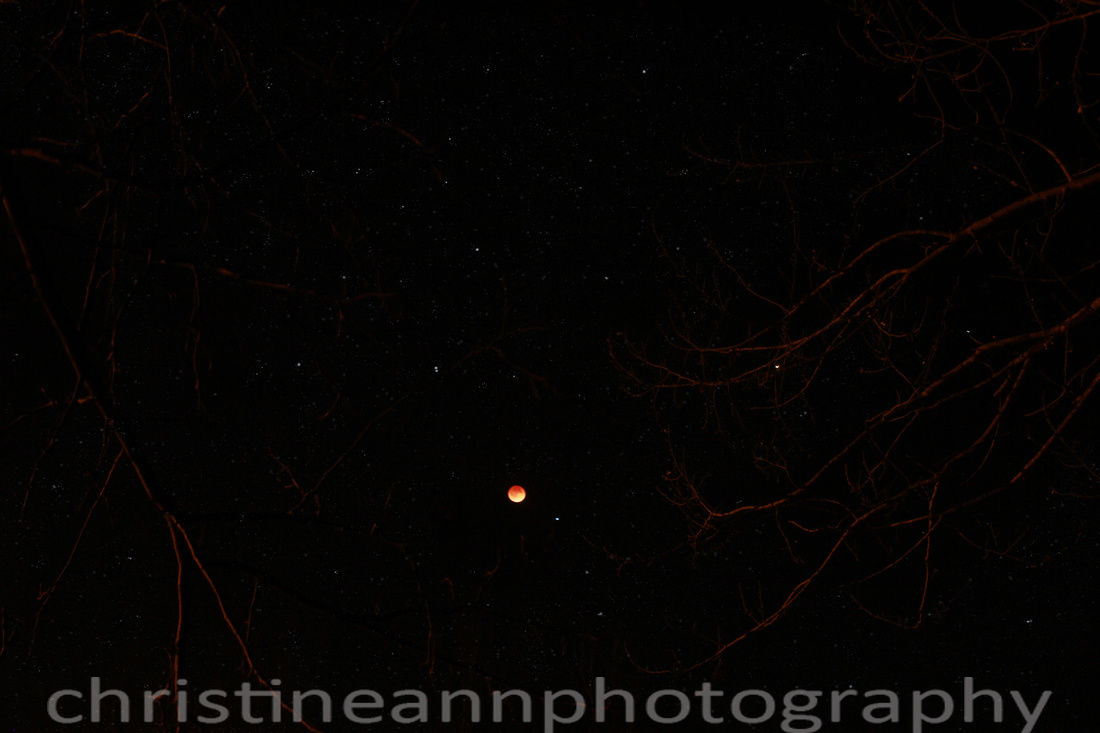 ^  This is about what it looked like from my POV.

So that is my take away from Blood Moon/Bloody Moon/Red Moon/Lunar Eclipse of April 2014.

If you missed it, no big deal, there is another Blood Moon appearing on October 8th :).

I have to say.. I LOVE this type of photography!  It's very relaxing and unique.. I'm very glad I stayed up late to photograph it.  I do have to say that I enjoy it a lot more when it is nice and warm out though.  I was freezing and my fingers were numb by the time I went inside.  It's also very unnerving to be outside in the middle of the night in Duluth, Minnesota.  I hear an occasional coyote, and there are wolf sightings.  While I was outside I had a "herd" of deer run past me!  They must be the same ones that keep appearing in my yard - they come so frequently and predictably I was able to get some photos of them [ pictures here ].  What did surprise me though, is there was a large group of them - around 6.  They were clonking along the roads and I couldn't see what type of animal they were due to a row of pine trees so I decided to go inside and they all instantly froze.  So then I instantly froze.  The "leader" deer started scoping out the area and then they all ran off.  It was freaky even though I was only 1 foot away from the door.  I guess I need some  pepper spray or something so I don't uhhhh die doing middle-of-the-night photography ;).

Mascoutah | Belleville | OFallon | IL Photographer | Christine Ann Photography
Hi Julie! The reason some have stars and some do not is because the ones with stars are a composite where you take one photo of the moon, one photo of the stars, and combine them together. It's very difficult to get a photo with a lot of stars in it when the moon is in the viewfinder because the moon gives off so much light you can't expose the image long enough to pick up the stars. :).
Julie(non-registered)
these are excellent pics!! that telephoto lens must be amazing!! one question i have is why there are more stars on some pic than others?
No comments posted.
Loading...
Subscribe
RSS
Recent Posts
Mascoutah Illinois Photography Now Serving O Fallon Illinois Region!! Enger Tower Wedding Photos | Duluth MN Family Photos Family Photos at the Aerial Lift Bridge Cake Smash - Gold and Pink Theme 2018 Hiatus! Happy Halloween! Magical Maternity Session at Lester Park Leif Erickson Park Photo Session Examples
Keywords
photography duluth photographer minnesota hermantown mn family photos children session
Archive
January February March April May June July August September October November December
Christine Ann Photography
Powered by ZENFOLIO User Agreement
Cancel
Continue